Menu
Log in
Register
Install the app
You are using an out of date browser. It may not display this or other websites correctly.
You should upgrade or use an alternative browser.

Something that I've given a little help with over recent months - because, for my sins, in my day job I am a university historian - is this project hosted by the University of Portsmouth but in conjunction with (what was called) the NRM and the University of Warwick. This is the Railway Work, Life and Death project, led by Mike Esbester which aims to make it easier to find out about railway worker accidents in Britain and Ireland from the late 1880s to 1939. They aim to provide data about who was involved, what they were doing on the railways, what happened to them and why. Although today most people don’t realise it, working on the railways 100 years ago was incredibly dangerous, with hundreds killed and tens of thousands injured each year.

So in other words, this is about the everyday life (and occasionally, and unfortunately, death) of the railway drawing from the paper records of these cases from across England, Wales, Scotland and Ireland. What these sources can do is to reveal ways of working and the value placed on employees which as well as being generally interesting has some import for us modellers.

The dataset, an Excel file can be found here: The Accidents - Railway Work, Life & Death

Mike is very receptive to feedback and railway-specific gen so I'm sure would welcome any comments and thoughts you might have. You can get hold of him via Twitter if you do that sort of thing, or by email: OldRailwayAccidents (@RWLDproject) on Twitter

You might also enjoy the associated online exhibition with the NRM: Caution! Railway safety since 1913 | National Railway Museum

This is a fabulous project - I’ve been delving into the discoveries and the tangents thrown out. The number of injuries and deaths of workers in the early 20th century beggars belief. We moan about health and safety gone mad but there was absolutely no such thing in your average worker’s life until quite recently. It’s not just about being killed at work or major disasters - the minor accidents as just as fascinating: bruising after being caught between buffers or catching a foot on the coupling rod under the footplate of a moving loco make me think of what methods of pain relief there were back then let alone support for families when the breadwinner convalesced. Swindon has its own false limb department...

Also the lack of training and level of responsibility that led to ‘mishaps’. One story is of a Tyne Dock shunter releasing too many wagon brakes in order to get a rake moving onto the dock - where they shunted by gravity. Once they were on the move he was unable to pin them back down, the wheels skidded on the greasy rails and the wagons came into collision with a second take which in turn demolishes the cabin on the dock - two workers inside this end up with back injuries. That was weather conditions, inexperience, poor judgement and built-in risk all contributing.

Yes, this website is the kind of reason why I never make those daft elf and safety jokes, nor that the past was a sunny upland of health and wellbeing.

Railway deaths still happen today but are thankfully very rare as this blog from the ORR recounts, compared to the hundreds a year in the 19th century.

76043 said:
Yes, this website is the kind of reason why I never make those daft elf and safety jokes, nor that the past was a sunny upland of health and wellbeing.

Railway deaths still happen today but are thankfully very rare as this blog from the ORR recounts, compared to the hundreds a year in the 19th century.

Absolutely, Tony - what's remarkable (to me anyhow) is the number of people involved in multiple incidents. In itself that says something interesting about individual companies as employers but also about attitudes to risk, not always healthy. From my perspective, it's also interesting that Mike's primary interest is as a social historian interested in disability. My (extremely limited) input aside from a bit of enthusiasm has been to provide a bit of technical railway detail - answers to questions such as 'what is a brake stick?' and the like. I owe him an email...

Dragging this back from the depths - the project has a new data release (coming in July) with around 16,000 new records. Mike would like to hear from anyone interested in the material from any perspective so if there's anything you'd like to add, or to see, please drop him a line. Read more here: 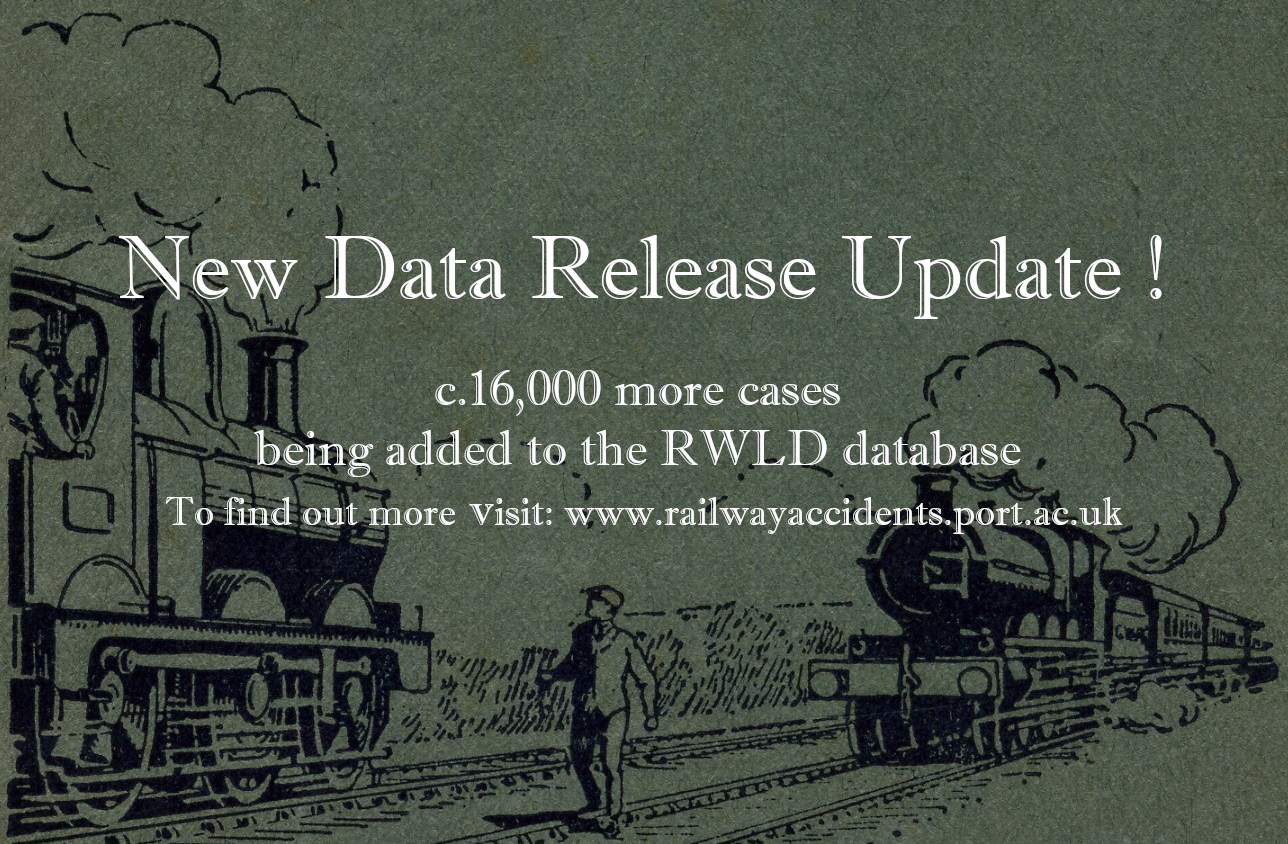 Our new data release: what do you want, and where? - Railway Work, Life & Death

Exciting news! We’re gearing up to make our next data release – around 16,000 new records. But we need your help … Provisionally we’re aiming for mid-July, as we’re cleaning up the dataset at the moment to make sure it’s as accurate and consistent as possible. This has been a long-term task...
www.railwayaccidents.port.ac.uk